Back to the route

Leeuwarden/Ljouwert has been the capital of Friesland since 1524. The city has a rich history and the Liwwadders are still proud of this. You can see it everywhere in the city. Monuments, old facades and museums stand for the history of the city.

During a city walk, you will learn all sorts of things about the city. Who were the ancestors of King Willem-Alexander? In which monuments did they live? Where was Mata Hari born? And what influence did Leeuwarden actually have in the past? Combine a walking tour through the city with a visit to a museum. That way you will really get to know Leeuwarden!

Not only is the history of Leeuwarden rich, Leeuwarden is now the capital of Friesland, a province that attaches great value to its own language culture. In 2018, Leeuwarden became the Cultural Capital of Europe. As a result, there is still plenty to do, see and experience in the city. One of the most striking legacies of 2018 is the ‘Love’ fountain in front of the entrance to Central Station.

Incidentally, what is also not unimportant, Leeuwarden is the start and finish of the Eleven Cities Tour that has existed since 1912. The last Elfstedentocht on the ice was in 1997. Fortunately, there are all kinds of alternatives. For example, the Elfstedentocht  by bicycle and motorbike is held annually on Whit Monday. In many places, bridges are raised and gates are installed, so that the route can be driven completely. But… that’s not all. You will be at the start of the one and only Eleven Cities Tour by motorhome!

Where to get the stamp? 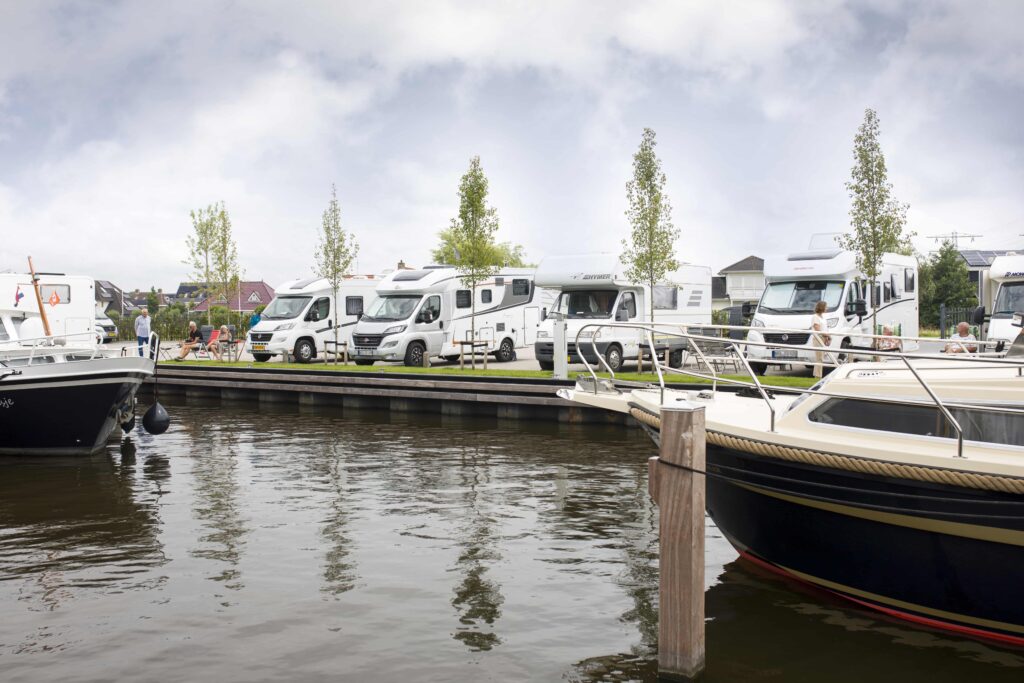 If you are visiting Leeuwarden by motorhome as part of the Eleven Cities Tour, the best place to stay is Camperplaats Leeuwarden. This newly renovated motorhome site is located in a district outside the centre. The lots are spacious, there is a lot of greenery, and the gate closes at night so you can feel secure staying here.

On check in, you receive a key with various discount codes for activities in the city and for free fresh buns from the nearby supermarket Jumbo. If you spend at least €25 with a stamp card, you will also receive a handmade Frisian “sugar bread” from Teije De Boer. At Ut Streekie, tasty snacks from Van Der Meulen are ready for you on presentation of your stamp card.

From the motorhome site you can get to the centre quickly by bike, but the connection to the station is also good by bus. When you leave the station building you are right in front of the ‘Love’ fountain!

What to do in Leeuwarden?

As you can see, Leeuwarden has a lot to offer. Below we have made a list with things to do in Leeuwarden!

A clearly visible memory of the cultural capital Leeuwarden 2018 are the 11 fountains. In all eleven cities of Friesland you will now find a fountain. These were created by eleven international artists. The artworks contain special elements such as fog, ice, steam and sea water.

In Leeuwarden you will find the fountain ‘Love’. It was created by the Spanish artist Jaume Plensa. The fountain consists of two white sculptures 7 meters high, representing a boy and a girl. It seems that they are looking at each other, but their eyes are closed. A cloud of mist surrounds the fountain. There is something dreamy about the fountain. The artist was inspired by the morning fog over the Frisian fields.

You can combine a visit to the fountain with a walking tour through the city. This way you can discover all the highlights of Leeuwarden!

Would you like to get to know the city better? You can do this with a bike tour through Leeuwarden, led by an enthusiastic local. After this bike tour you will have a good impression of the beautiful Frisian capital. The city guide will cycle past old monuments, hidden gems and trendy places and tell you nice stories about them. It’s certainly not a boring history lesson, but just a super fun bike tour, crisscrossing Leeuwarden!

You can also explore Leeuwarden by Baja Bike. You can ride past all the highlights in two hours with a group or choose a private tour.

The Blokhuispoort has been located in the center of Leeuwarden for centuries. Many criminals have been imprisoned here. During a prison tour through the Blokhuispoort, you will get a glimpse of the impressive cell blocks. Learn more about the building on a guided tour of the yard and squares, and marvel at the bunker and solitary confinement cells in the building’s basements. A former prison guard will guide you through the building.

A city tour is also highly recommended. A Guide to Leeuwarden’s walking tours through the city take place throughout the whole year. The tours will take you along important places like the Stadhouderlijk Hof at the Gouverneursplein or the Princessehof. In addition, you will also discover some places that you certainly would not have found on your own. You can book a private tour or join a public free tour through the city.

With the public free tours, you simply pay what it was worth to you at the end. The English Free Tour starts every Saturday at 12:00 pm.

Would you rather discover the city on your own? For € 1,- –  € 5,- you can download different routes from the website.

What else is fun? A city walk following the miniature people. Michel Tilma, a photographer from Leeuwarden, likes to take pictures of miniatures. Since 2019, he has been placing these miniatures all over the city. You can already find more than 50 of them. Some miniatures are even on the campsite. The route is available for purchase at Camperplaats Leeuwarden. Alternatively, you can walk the entire route via Google Maps.

One of the most important monuments of the city is the Oldehove. A leaning tower that was supposed to be the tallest church in the Netherlands. Its construction was started in 1529. When the builders reached a height of about 10 meters, the tower sank. The intention was to correct this by continuing to build vertically. Unfortunately, this had little effect, as the tower continued to sink. In 1531, the master builder Jacob van Aaken died. It is even said that he died of grief over the building. After his death, construction continued for a while, but eventually it became clear that the tower would never be as tall as hoped. The leaning tower, which was never completed, is still the symbol of Leeuwarden. If you want, you can climb the 183 steps and enjoy a beautiful view over the city. A ticket costs € 3,50 per person. 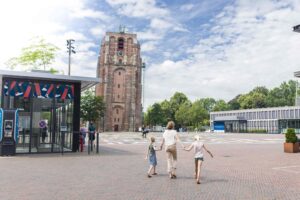 The Fries Museum is one of the most famous museums in Friesland and Leeuwarden. The museum has an impressive collection of ancient and modern art and also offers a lot of interesting facts about Frisian history. There are also changing top exhibitions that attract many visitors every year. There is also an abundant offer of different activities.

A few years ago, the museum moved to a new building on Wilhelminaplein, better known as Zaailand to the people of Leeuwarden and Friesland.

There is always something to do in Leeuwarden! Throughout the year there are several events. One of the best known is the Street Festival. The Fries StraatFestival turns the city center of Leeuwarden upside down every year during one weekend. There are also many different exhibitions at the various museums, and big musical events at the Oldehove and the Wilhelminaplein (among the Frisians better known as the Zaailand). Check the agenda of Visit Friesland and the agenda of Visit Leeuwarden for the most recent information.

Spinoza
Spinoza has been a well known restaurant in Leeuwarden for over 30 years. In 2020 the restaurant was taken over and underwent a transformation. You can eat in the beautiful garden, enjoy wine from the wine cellar and attend theater dinners. The dishes are fresh and tasty, made with local, sustainable products.

Barrevoets
It is fresh, conscious and makes a killer cappuccino. At Barrevoets you can find very good cappuccinos and all kinds of goodies, hand made with fresh ingredients. From smoothies, to a nice lunch or drinks, they have it all. It is also a nice place to relax after all the cycling and walking through the streets.

Grab your walking shoes and walk among the ring-tailed lemurs, stroll along the beach with the penguins and stand eye to eye with the Nile crocodiles. AquaZoo Leeuwarden is a zoo where you can see the animals really close up. You can walk in peace through a natural green environment. And everywhere in the park you have plenty of space, which is good to know in these times. 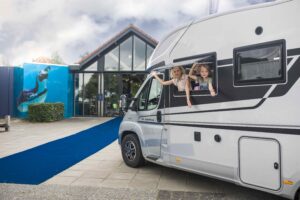 You thought that gondola rides were only possible in Venice? Not at all! You can also get to know Leeuwarden from the water with a Gondola boat trip. Rent a private gondola, go along with a group or book a special arrangement and let yourself be transported through Leeuwarden in a romantic manner. You can make a reservation through the website, but you can also call + 31 6 36515670.

In the Museum House of Eysinga you go back in time and visit the noble family of Eysinga. The mansion dates from the eighteenth century and was built by a man of great prestige at the time. The house looks gorgeous. Feel free to take a look at the rooms of the staff to see how they lived. That way you’ll really get to know the family.

You prefer to enjoy good food by the camper? Then go along the House of Taste in the Kleine Kerkstraat. Here you will find all kinds of delicious delicacies. From nuts to a good sausage and from a good bottle of wine to delicious beers of Kâld Kletske from Dokkum. 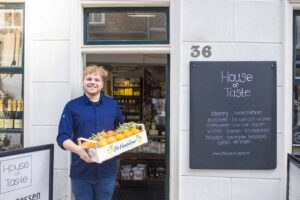 Would you like to enjoy various Frisian regional products on the way? It is possible at the little shop Ut Streekie. In Leeuwarden, there is something delicious from Van Der Meulen waiting for you at Ut Streekie! As a true Frisian baker’s family, Van der Meulen from Hallum is happy to contribute. At Ut Streekie in Leeuwarden, Van Der Meulen has a present ready on arrival and there is a nice giveaway to join. Van der Meulen wishes you a warm welcome in Friesland and in this nice Frisian store.

If you want to get some presents, you can buy separate products, but you can also put together a nice Frisian package. If you are looking for a souvenir, you will find both Frisian and Dutch souvenirs here. Nice to give away or to take with you as a memory to your Elevencitytour! Ut Streekie can be found in 3 of the 11 cities. Besides Leeuwarden you will also find them in Franeker and Dokkum. See the website for the possibilities and locations. The address in Leeuwarden is Oldehoofsterkerkhof 52.

Would you like extra information about the 11 cities, fun activities and a chance to win great prizes? Then fill in your e-mail address.

The one and only Camperelfstedentocht is an initiative of Camperplaats Leeuwarden. We hope that even more motorhome owners will find their way to Friesland!